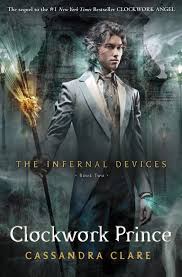 Book Title: Clockwork Prince
Author: Cassandra Clare
Number of Pages:
Genres: Supernatural Romance, Fantasy
Books like it: Hex Hall, City of Bones, Twilight
My favorite quote: “Ah,” said a voice from the doorway, “having your annual ‘everyone thinks Will is a lunatic’ meeting, are you?
“It’s biannual,” said Jem. “And no, this is not that meeting.”

Brief Synopsis from Goodreads:
It’s time—for the riveting sequel to the #1 New York Times bestselling Clockwork Angel! The situation at the London Institute has never been more precarious. With Mortmain and his clockwork army still threatening, the Council wants to strip Charlotte of her power and hand the running of the Enclave over to the unscrupulous and power-hungry Benedict Lightwood. In the hope of saving Charlotte and the Institute, Will, Jem, and Tessa set out to unravel the secrets of Mortmain’s past—and discover unsettling Shadowhunter connections that hold the key not only to the enemy’s motivations, but also to the secret of Tessa’s identity. Tessa, already caught between the affections of Will and Jem, finds herself with another choice to make when she learns how the Shadowhunters helped make her a “monster.” Will she turn from them to her brother, Nate, who has been begging her to join him at Mortmain’s side? Where will her loyalties—and love—lie? Tessa alone can choose to save the Shadowhunters of London…or end them forever.
Trailer:


My Summary: My advice to you right now is this:

After reading a book like Clockwork Angel, are you going to be disappointed by the Clockwork Prince?
My answer: Heck no!
Be prepared for love, mystery, pain, curses, sacrifice, and a lot of good vs. evil. And a lot of crying over Will and telling Jem to back off, if you are on Team Will like me. What I really liked about the Clockwork Prince was you learned a lot about why Will acts like poison to everyone who shows kindness to him, and there is also a lot of sweet things that Will does and says that makes me want to TAKE HIM AWAY FROM TESSA! If she doesn't want him, fine, but I want him!

This is a part from the Clockwork Prince, found in Chapter 5 on page 113. I think this is one of the best Will and Tessa moments in the whole series, and most don't agree with me.

“Tess.” A voice came urgently in her ear.  “Tess, you’re dreaming. Wake up. Wake up.” Hands were on her shoulders, shaking her; her eyes flew open and she was gasping in her ugly gray dimly lit room at the York Institute. The covers were tangled around her, and her nightgown stuck to her back with sweat. Her skin felt as if it were burning. She still saw the Dark Sisters, saw Nate laughing at her, and Henry dissecting her heart.


“Will,” she whispered. He still wore his dinner clothes, though they were rumpled, his black hair tangled, as if he had fallen asleep without changing for bed. His hands remained on her shoulders, warming her cold skin through the material of her nightgown.


“What did you dream?” he said. His tone was calm and ordinary, as if there were nothing unusual about her waking up and finding him sitting on the edge of her bed.


She shuddered at the memory.  “I dreamed that I was being taken apart-that bits of me were being put on display for Shadowhunters to laugh at-“


“Tess.” He touched her hair gently, pushing the tangled locks behind her ears. She felt pulled to him, like iron fillings to a magnet. Her arms ached to go around him, her head to rest on the crook of his shoulder.  “That Starkweather is an idiot for showing you what he did, but you must know that it’s not like that anymore. The Accords have forbidden spoils. It was just a dream.”


But no, she thought. This is a dream. Her eyes had adjusted to the dark; the gray light in the room made his eyes glow an almost unearthly blue, like a cat’s. When she drew a shuddering breath, her lungs filled with the scent of him, Will and salt and trains and smoke and rain, and she wondered if he had been out, walking the streets of York as he did in London. “Where have you been?” she whispered. “You smell like nighttime.”


“Out kicking over traces. As usual.” He touched her cheek with warm, calloused fingers. “Can you sleep now? We’re meant to rise early tomorrow. Starkweather is lending us his carriage so that we might investigate Ravenscar Manor. You, of course, are welcome to remain here. You need not accompany us.”


She shuddered. “Stay here without you? In this big, gloomy place? I would prefer not to.”


“Tess.” His voice was ever so gentle. “That must have been quite a nightmare, to have taken the spirit out of you so. Usually you are not afraid of much.”


“It was awful. Even Henry was in my dream. He was taking apart my heart as if it were made of clockwork.”


“Well, that settles it,”  Will said. “Pure fantasy. As if Henry is a danger to anyone except himself.” When she didn’t smile, he added, fiercely, “I would never let anyone touch a hair on your head. You know that, don’t you, Tess?”
I hope you enjoyed this review, and I think I will end here. The Clockwork Prince has much in store for you, please read it!