Guys!!! I got nominated for an AWARD!!! The Sisterhood of the World Bloggers Award!!! I was nominated by the lovely Shikha, Leah, and Nina over at The Overflowing Shelf. THANK YOU!!!!! 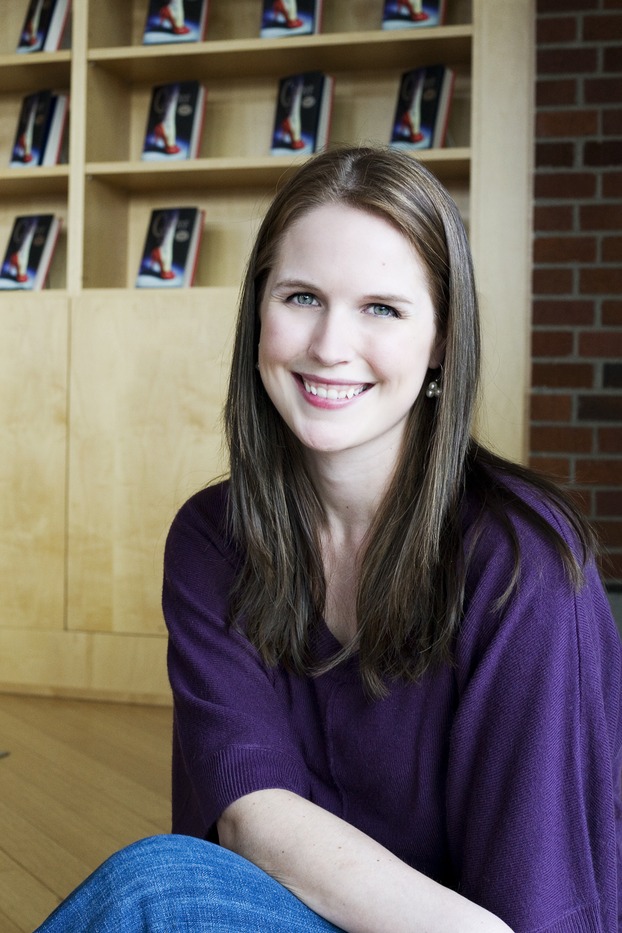 I am excited for this post the very most, because Marissa is one of the best and most talented authors that I know. 4. Besides Cress, Marissa has also written Cinder, Scarlet,  The Queen’s Army, and Glitches.


Family/Pets: I have a husband, Jesse, and three cats: Callie Jo, Blackie, and Stormus Enormous.
Where you live: Tacoma, WA, USA, in the house Jesse built (literally)
3-4 Hobbies or things you do in your spare time: Eat, cook so I can eat, go antique shopping, and I pretty much enjoy any sort of live entertainment (concerts, musicals, stand-up comedy, etc.)
Favorite ice-cream flavor: Chocolate chip cookie dough
Childhood dream job: Writer!! Though I also went through a stint where I wanted to be a fashion designer.
Favorite movie: I don't know that I have one... Pride and Prejudice, maybe?
Favorite scent: Fresh-baked cookies.


How did your idea for Cinder come to you? What inspired you, if anything?
It began when I entered a writing contest in which the host had listed about ten random prompts and writers had to choose two of them to include in their stories. My two prompts: set it in the future and include a fairy-tale character. My contest entry was a sci-fi version of Puss in Boots and I had so much fun writing it that I thought I would try to do an entire series of sci-fi fairy tales! A couple months after that I was drifting off to sleep when the lightning bolt struck: Cinderella… as a cyborg! I crawled out of bed and spent about an hour brainstorming and jotting notes. Thus, The Lunar Chronicles was born.


What did you want to be when you were a kid growing up?
A writer! Always a writer. Though I also went through periods where I wanted to be a Broadway actress (before I realized that I can't sing) or a fashion designer (before I realized that would require learning how to sew, which seemed like a drag).
Did you plan for the Lunar Chronicles to be a dystopian fairytale? Were they originally supposed to just be a fairytale? Just dystopia?
The initial concept I had was to write futuristic retellings of fairy tales - so I knew I wanted to give science-fiction twists to some of these classic stories. I had that idea in mind even before I knew which fairy tales I was going to retell! But I don't really think of them as "dystopian." With the exception of the plague and an impending war, the world that Cinder lives in isn't half-bad. It's obviously not perfect, but I think 126 years of world peace is something for Earth to be proud of.
Do you have any future writing plans?
Many! I hope the Chronicles are just the start of a long writing career. Right now I have one confirmed book that will follow this series: HEARTLESS, a prequel to Alice in Wonderland focused on the Queen of Hearts. I'm very excited about it!
Who is one of your favorite characters in the Lunar Chronicles?
I honestly adore all of my characters - even the evil ones! - but my favorites to write are Iko and Thorne. It's the funny characters that excite me the most, because I feel like they tend to write themselves, and I'm never quite sure what crazy thing they'll say or do next. It's so much fun to put them in a chapter and see what happens.
Was Cinder always the lost princess, or did you decide that ending later?
When I first outlined the series, I left it fairly open - it was possible that it could be Cinder, Scarlet, or Cress. But by the time I'd finished the first draft of Cinder, I was pretty sure it was her, and DEFINITELY sure by the time I finished the second draft.
What was your favorite scene to write in the series?
My favorite scene actually takes place in Book 4: WINTER, so I obviously can't tell you much about it. But I've had the idea from really early on, and I can see this scene so clearly in my head. A lot of chapters end up having a movie-like feel to them in my head, but this one really felt like watching a movie when I wrote it. I only hope my writing can do it justice so the readers experience it the same way!
Did you have to delete any scenes? What were some alternative character names?
Ha! I have entirely deleted DRAFTS! Two major characters have changed their names. Captain Carswell Thorne was originally Alexander Woods (but Woods and Wolf were too similar and I kept getting them mixed up), and Princess Winter was originally Princess Ebony (but that was before I realized she was black, at which point the name Ebony just seemed like a cliche). Oh, and when I was naming Cress, I spent about twenty minutes wanting to call her Arugula, lol.
at 5:52 PM 2 comments: